an interactive installation by Lisa Rybovich Cralle and friends 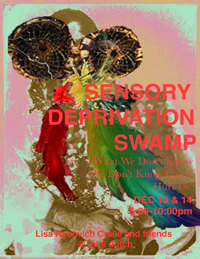 The deceptively titled “Sensory Deprivation Swamp” toes the line between sensory deprivation and over-stimulation by utilizing the ancient and mysterious phenomena of darkness and silence to alternately conceal and reveal what’s going on beneath a dense layer of demonic fog.  What at first appears to be a pitch-black and silent room slowly exposes itself to be the cricket-inhabited, Day-Glo Florida Everglades at midnight; full of strange and shadowy surprises that are only discernible once the viewers’ senses adjust to the dark and nearly-silent environment.

Lisa Rybovich Cralle and friends bring the Everglades to you, Chicago, as a gesture of reverse-tourism, and a hot and humid escape from your chilly winter.  Please enjoy!  FYI:  Did you know that the city of Chicago used to be a swamp?  The name “Chicago” is the Native American term for the wild onions that used to grow here.  Bon appetite!  Onion-flavored snacks will be served at both of the openings. Visitors are also encouraged to bring objects to leave in the Swamp.