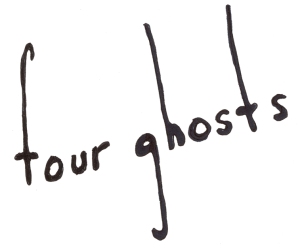 Hanner has been exhibiting in Chicago since 1998, showing at venues such as at the Hyde Park Art Center and Deadtech. He’s also shown nationally and internationally in Denmark and Puerto Rico. He graduated from Columbia obtaining a BFA in 1999.

Update: Matt Hanner passed away on December 13, 2011. He was such an amazing artist and friend, and will be missed dearly. Please consider donating to his memorial fund at Columbia College.

Under the designation the donor can check Other and then write The Matt Hanner Artistic Excellence Scholarship and the gift will be sent to the appropriate fund.
http://colum.edu/giving

Comments Off on four ghosts